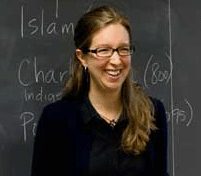 Over the years, I have developed an irreverent sense of humor to compensate for my lack of elegance, as a way of disarming potential offendees (as well as to convince myself that I don’t care if people don’t like me). I should also probably mention that I have a tendency to, um, curse like a sailor, which gets more pronounced when I am anxious, defensive, or on an adrenaline rush – like basically every time I find myself speaking in front of a group of people who look bored.

So my first year of full-time teaching was, if not an unmitigated disaster, at least a really good example of how not to treat your students. I came to my current job following some disappointing experiences as a preceptor in a divinity school and an adjunct instructor in two different undergraduate institutions on the entitled, grade-grubby East Coast. I had also heard that, for female faculty, it was important to “start out mean and get nicer” rather than the other way around. Upon arriving at my current position, I composed detailed syllabi outlining every kind of forbidden behavior I could think of, with specific punishments. In my first class meetings I urged them to drop the class if they weren’t prepared to fulfill my expectations without whining. I yelled at them if they didn’t staple their papers together. I yelled at them if they hadn’t read. I yelled at them if they looked sleepy. It was thus unsurprising when my evaluations that year contained comments like, “Why is she so sarcastic?” or “I learned nothing from this course.” One student came to my office so enraged about his grades that he actually scared me. (He complained to the provost and I was reprimanded for using profanity in class.)

I arrived in Crawfordsville in 2007 deeply demoralized. I couldn’t help feeling partly responsible. I had put so much negative energy out there – was it any wonder that some came back at me? It doesn’t feel like an overstatement that my pre-tenure workshop saved me. The staff at the door handed me the key to a luxurious room all to myself. The leaders welcomed me, plied me with drinks and chocolate, and told me I was safe. My peers took me as I was, letting me know that they, too, struggled with students, colleagues, and administrators. They made me feel normal.

The most important take-away came out of our many conversations about teaching personae. “What’s your persona?” they asked us; “What do you want it to be?” I balked at first – doesn’t a “mask” somehow imply a lack of authenticity? Shouldn’t I just be myself, whoever that is at the moment? Yes and no, was the answer. What’s important is to think about students first – what do I want them to learn? – and then think about who I need to be to get them there. My teaching persona, as presented in syllabi, emails, and the classroom, should “align” with my goals, given my particular audience.

And my audience is, by and large, Midwestern and non-confrontational, so I needed to take it down a notch. Many are ill-equipped to face complex ideas without a lot of help. Some are not strong readers, and few of them prioritize religious studies among their many pursuits. But I have found that, if I can convince students that I actually like them (which I do) and am on their side (which I am), most can relax and be nudged into thinking critically about religion. The key is to nudge rather than shame or scare. This means adapting every assignment, paper, exam, discussion, and lecture accordingly.

Since my Wabash conversion, my course evaluations consistently indicate that students worked hard and learned a lot, that they had fun, that the course brought home the meaning of “liberal arts” for them. More of them come to office hours or take another class with me. Perhaps most importantly, I feel happier in my teaching. To connect to students I had to – surprise! – stop defending myself against them. It is both the simplest and most difficult of tasks, but well worth the effort. A recent quotation [http://www.nytimes.com/2013/01/06/magazine/george-saunders-just-wrote-the-best-book-youll-read-this-year.html?pagewanted=all&_r=0] gets at what I mean: “Stay open, forever, so open it hurts, and then open up some more, until the day you die, world without end, amen.”

What about you? Do you find yourself putting on a protective persona? Have you found any effective ways to stay open to your students for the sake of their learning?

Kate Blanchard, Associate Professor of Religious Studies, Alma College Kate is currently on sabbatical near Atlanta doing a collaborative project with Dr. Kevin O'Brien (a friend from her pre-tenure workshop) about Christian ethics and free market environmentalism. When not on sabbatical, she makes her home in Alma, Michigan, with her husband, Rev. Chris Moody, and their son, Gus, a dinosaur and train connoisseur. She has taught at Alma College Buy Modafinil Online, 100% Delivery Guarantee or your money. Order Modafinil & Armodafinil online from the only American-run buy modafinil vendor in the world. since graduating from Duke in 2006. She is the author of The Protestant Ethic or the Spirit of Capitalism: Christians, Freedom, and Free Markets (Cascade, 2010) and co-editor of "Lady Parts: Biblical Women and 'The Vagina Monologues,'" which includes six pieces authored by her students. She mouths off now and then at the Huffington Post, and very occasionally tweets at @blanchard_kate.