Home > Resources > Blog > Teaching with Digital Media > Vlog as Course Content: Is the Documentary the Future?
Selected Items Select an item by clicking its checkbox
Actions for selected results:
Sign-up to receive email alerts when new blogs are posted Read our Blog Series List of  Bloggers 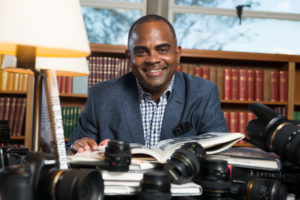 Vlog as Course Content: Is the Documentary the Future?

Nick Fraser, in his book Say What Happened: A Story of Documentaries says, “. . . docs have morphed into contemporary essays, becoming a form whereby we get to experience highly provisional stabs at reality, but, far more than fictions, which are usually finished and fixed in their own reality, they are transformed by it. . . . . The best docs celebrate a sense of the accidental. And they matter.  Like unknowable bits of the universe, they come into existence when a collision occurs.”[1] Fraser argues in his book that documentaries matter, they change the way we see and engage the world.  Documentaries educate us, transform us, and challenge us. Fraser argues that the documentary is the new long form essay, it is what people are watching as they read. We are no longer a culture that is rooted solely in the literate and oral tradition, but a new tradition has emerged and it is the documentary as reliable scholarly source. If Fraser is right, and I believe he is, then how does this new reality expand our opportunities to teach in ways that are truly transformative and liberating?

In my Evangelism and Social Justice course I assigned Michelle Alexander’s book The New Jim Crow: Mass Incarceration in the Age of Colorblindness along with Ava DuVernay’s, Oscar nominated documentary, 13th: From Slavery to Criminal with One Amendment and to my surprise this pairing was a game changers.[2] The students got it because they read, they saw, they felt it, and our conversation was transformative. The students were able to weave the two forms of scholarship together. In this class, we were wrestling with the fact that God calls God’s church to spread the gospel and that gospel is one of justice. God is on the side of the oppressed and God calls us to set the captives free. God calls us to see injustice, call it out and address it by correcting it. We spread the gospel by being the gospel. My students got it.

One of my students said to me, “I finally get what Black theology is all about. I get it and I have to do something. Thank you so much for assigning the documentary. I see it now.” When she said, “I see it now!” this was eye opening for me (pun intended). It was the wedding of these two, the written word and the visual demonstration of that word, that help my students see. My students are used to watching Netflix, all of my students had a subscription or access to someone’s subscription and this viewing came natural to them. They live in the visual world and I have found that documentaries, like books, are a part of their scholarly diet. Why not feed this appetite?

Do documentaries really make a difference? Can they change the way we see the world and then make us act on behalf of justice? Let me cite one case as example of just how powerful documentaries can be. The Fall 2019 edition of The ARTnews reported, “Agnes Gund believes in giving her art away, with donations of hundreds of works from her collection to the Museum of Modern Art spanning decades and others to the many institutions she has supported. But the 81-year-old philanthropist thought she could achieve more by selling a treasured painting after seeing 13th (Ava DuVernay’s,13th: From Slavery to Criminal with One Amendment). Feeling a call to action, Gund choose to sell her favorite holding . . . for $165 million to billionaire investor Steve Cohen, after refusing his overtures for years.  She then used $100 million of the proceeds from the sale in 2017 to launch the Art for Justice Fund, a partnership with the Ford Foundation and Rockefeller Philanthropy Advisors currently working against the scourge of mass incarceration through concrete and poetic means.”[3] Agnes Gund’s worldview was changed by engaging the work of Ava DuVernay. Gund saw and she acted!

Can we get our students to see and act? Can we employ the use of documentaries in our classes in similar ways we have employed readings in the pass? Can we make our own documentaries and have them replace our lectures? What does it take to make your own documentary? All it takes is a camera, editing software, and our no-permissions-asking selves to just go and do it. In my African Roots of Black Theology class, I created a two-part documentary to start the class. The students engage my asking the question in the context that gave rise to the question. It is a new and more visceral way for them to engage in a new form of contextual visual education. My students got to travel with me as I traveled through Egypt. I used the daily vlog as way to tell the story, share my questions, pondering and musings. The students go with me to where my story begins and it begins in Africa. I also created photo albums for all major stops along my journey so that students could pause and admire the still images in conversation with the moving images. I offer these examples as a testimony of my first attempts and I look forward to seeing yours as we ask what are the now / next in pedagogical practices?

DuVernay, Ava. 13th: From Slavery to Criminal with One Amendment. Netflix; 2016.