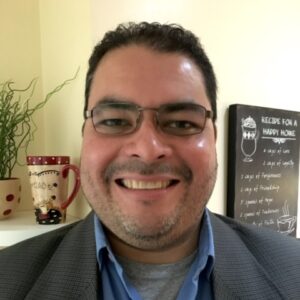 Our seminary recently hosted a symposium on beauty. For the occasion, I performed a musical interpretation of a digital art piece entitled “By night and by day,” part of a larger composite of cloud themes depicting God’s presence with his people by artist Sarah Bernhardt. I explored a range of sonorities on the double bass to tell the Exodus story, to depict God’s leading of Israel out of Egypt by a pillar of cloud by day and of fire by night.

To guide me in my portrayal of the theme of divine presence, I composed a musical setting based on a melody from a Latin American song entitled El Señor es mi luz (The Lord is My Light) based on Psalm 27. The psalm speaks of Israel’s trust in the Lord’s protection from adversaries who assail her during her earthly pilgrimage. The psalmist also sings of Israel’s eschatological hope to dwell in the house of the Lord forever and behold his beauty in his temple.

In my composition I employed word painting, a technique used in sixteenth century music to match a concept in a written text with a corresponding musical effect.

The following description of the flow of the piece explains how I used the range of the double bass to communicate various aspects of the biblical story.

The piece begins with a variation of the psalm melody using high pitch harmonics, which are achieved by touching the strings without pressing them. This technique communicates a sense of God’s presence on high as Israel prepares to cross the sea. It is a calming presence; God is in control.

Energetic tremolos with the bow

The harmonics are followed by energetic tremolos made with rapid bow movements to the chorus of the hymn. This technique expresses the tumultuous movement of God’s people away from their enemies, with the pillars of fire and cloud ahead of them as they rapidly (and perhaps a bit anxiously) make their way through the great waters.

To express Israel’s proximity to the waters of salvation, I play the psalm melody with the back of the wooden bow (col legno technique), evoking images of drops of water falling on or sprinkling faces and bodies as people prepare to cross the sea.

Flowing lyrical version of the theme with the bow (verse, stanza)

Then I play a flowing lyrical version of the theme with the bow, depicting Israel’s safe arrival to the Promised land, which anticipates the final beatific vision of God’s people in his presence.

Festive plucking to a Cuban guaracha

Plucking the strings (pizzicato), I play a Cuban guaracha (salsa) rhythm based on the song’s chord progression to express the mood of eschatological fiesta after the people’s safe passage through turbulent waters into the Promised Land.

Finally, I sing the hymn’s chorus in Spanish while tapping the top wooden shoulders of the instrument to a tamborito Panamanian rhythmic pattern, using the bass in a percussive way.

So, what makes the piece a Latin American interpretation?

The most obvious element is the use of a psalm in the Spanish language. But the more interesting ones are the plucking of strings to a Cuban Guaracha (salsa) and the drumming of the wood on the shoulder of the bass to a Panamanian tamborito.

But why infuse the text with a Latin American spin?

Here the context of the performance matters. I have performed this piece in three settings with similar audiences—predominantly White, monolingual (English), mid-Western church audiences in the United States.

By incorporating these elements in the performance, I am inviting the audience to imagine a world in which the biblical story is told, heard, and sung through Latino/a eyes. I am using music as a gentle challenge to see the biblical story in the context of the catholicity or universality of the church, which is a church of people from many ethnicities, languages, and nations. I am also raising awareness about the presence of forgotten Latino/a neighbors whose voices are often not heard, who crave for belonging, justice, and the psalmist’s hope in God’s deliverance.

By foregrounding these elements into the piece, my double bass functions as an extension of the Latino teacher-performer’s own identity as a proclaimer of God’s story, a bearer of an inclusive catholicity, and a herald of hospitality, justice, and hope.

About Leopoldo A. Sánchez M.

Dr. Leopoldo A. Sánchez M. is the Werner R.H. and Elizabeth R. Krause Professor of Hispanic Ministries, Professor of Systematic Theology, and Director of the Center for Hispanic Studies at Concordia Seminary in St. Louis, Missouri. He received his PhD from Concordia Seminary and his MDiv from Concordia Theological Seminary. His latest books are T&T Introduction to Spirit Christology (T&T Clark, 2021) and Escatología: La esperanza cristiana (Concordia, 2020). Other works include Sculptor Spirit: Models of Sanctification from Spirit Christology (IVP Academic, 2019), and two Pickwick titles, Receiver, Bearer, and Giver of God’s Spirit: Jesus’ Life in the Spirit as a Lens for Theology and Life (2015) and Immigrant Neighbors Among Us: Immigration Across Theological Traditions (2015), which he co-edited with M. Daniel Carroll R. Dr. Sánchez is Principal Double Bass with the St. Louis Civic Orchestra, the bassist for Di Kamer Kapelye, and an avid listener and student of the music of Rubén Blades. He enjoys swimming and international cooking.