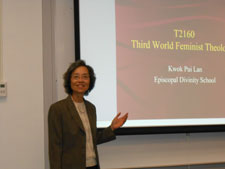 What if you were to stage a debate on the black Christ, instead of giving a lecture on James Cone’s black theology?

If you haven’t used debate in class, I encourage you to try it. The result might surprise you.

At a Wabash teaching workshop some time ago, we discussed different teaching and learning styles. Several of the pre-tenure faculty presented different pedagogies they have used in the classroom. The uses of drawing a timeline, role-play, fish-bowl, and service learning were discussed. I was intrigued by the example of using the format of debate and decided to try it in my theology class.

The class read the assigned text God of the Oppressed by James Cone. I asked for four volunteers to join the debate and divided them into two teams. The affirmative team would argue that Christ is black, drawing from the book’s

argument as support. The negative team argued that Christ is not black. After each team presented their arguments, members of the class could speak in support of one of teams. Several students volunteered to serve on the panel of judges.

I was surprised by the seriousness with which the debating teams approached the task. They met to generate ideas and develop strategies. The other members of the class were not just passive observers. They participated at the end of the debate, so they had to read the book carefully too.

I teach at a predominatly white school, where discussion about race and racism can be potentially explosive. James Cone’s writing always elicits strong emotions among both white students and students of color. Because of political correctness, some may feel that it is not safe or appropriate to criticize Cone’s ideas.

n a debate setting, the students take on new roles and personae. They are encouraged to look at the argument from both sides. The negative team brought out the arguments that Christ is universal and cannot be limited to one color, and that Christ can also be imagined as yellow or brown. The students were asked to and given permission to look at Cone’s book with critical eyes and articulate more than one version of truth.

The class was animated and involved. The best part was that the winning team got a prize—a box of chocolates—and team members were gracious enough to share with the whole class!

Kwok Pui Lan is Dean’s Professor of Systematic Theology at Candler School of Theology, Emory University, and a past president of the American Academy of Religion. An internationally known theologian, Kwok’s publications include Occupy Religion (with Joerg Rieger); Globalization, Gender, and Peacebuilding; Postcolonial Imagination and Feminist Theology; and Introducing Asian Feminist Theology. She is the coeditor of Off the Menu: Asian and Asian North American Women’s Religion and Theology and Postcolonial Practice of Ministry: Leadership, Liturgy, and Interfaith Engagement. Her blog can be found at http://kwokpuilan.blogspot.com/