Home > Resources > Blog > Race Matters in the Classroom > The Task of Decentering in Teaching Old Testament
Selected Items Select an item by clicking its checkbox
Actions for selected results:
Sign-up to receive email alerts when new blogs are posted Read our Blog Series List of  Bloggers 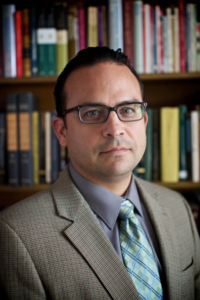 The Task of Decentering in Teaching Old Testament

My introduction to Old Testament course has served as an experimental site for decentering racializing master-narratives, especially those that have contributed to the marginalization of the Other in the Texas-Mexico Borderlands.

As a Latino biblical scholar, decentering represents an important pedagogical tactic that is shaped and informed by various forms of critical theory, postcolonial theory, and archival studies. This theoretical apparatus also draws heavily upon a lived experience of marginalization as an ethnic-Mexican in the Texas-Mexico Borderlands. Moreover, the present racial crisis in U.S. society has made the task of decentering a curricular imperative. Hence the task of decentering serves less as a professional exercise than a commitment to social justice and equality.

The Task of Decentering

To decenter racializing master-narratives, especially those preserving white privilege, I begin the course with several lectures in which I contextualize and demythologize Western versions of the historical critical approach. Given our English speaking context, I focus on 19th century England and the British Museum as locus for decentering modern studies of the Old Testament. The decentering happens in the retelling of the story, which is termed “reading against the grain.” Reading the master-narrative in this way aims to expose cultivated silence, exclusions, relations of violence and domination.  By reading in this counter-intuitive way a retooling of interpretive instincts takes place, allowing students to be better attuned to racializing logics or to what Edward Said calls “modern Orientalism” at work in scientific biblical criticism.I present contemporary scholarly reconstructions of the History of Israel and the authors’ socio-political context, keeping to the fore any Orientalist constructions of the Holy Land.

Decentering also occurs when I locate Israel politically in the ancient world, which is to say at the

margins of a series of competing empires (i.e. Egyptian, Neo-Assyrian, Neo-Babylonian,  Achaemenid and Greek). Throughout the semester, students learn to excavate at the margins of monumentalized history. They engage material culture and the visual portrayals of violence from alternative vantage points, in particular those engendered by Migration Studies, Border Studies, and Postcolonial Studies. They also learn to turn to forms of knowledge and practice not generally considered legitimate objects of historical inquiry or appropriate or adequate sources for history making, such as African American slave spirituals and Texas-Mexican Border Ballads.

Decentering as a Curricular Imperative

Operating in the interstices between contemporary readers and the Bible is a plurality of hermeneutical regimes. Within the field of biblical studies, this plurality—although not always celebrated—is structured hierarchically. Not only do different regimes of hermeneutical practice align themselves with certain forms of knowledge, they also give rise to varying economies of truth. Since the modern period, the reigning hermeneutical practice has deemed the disinterested gaze of the scientific reader as the master mode for determining a text’s meaning. Under this regime, readers take on a disembodied quest in which their primary goal is to find the Bible’s original meaning. Indeed, many in this regime have accrued high levels of prestige, which, in turn, has sustained this regime’s professional dominance within the field of biblical studies. Yet rendered unseen are the complex networks of privilege and collecting habits at work in a neutral reader’s field of vision. By placing the hermeneutical enterprise in league with a Western scientific world view, readers are taught to see the Bible in a linear spatial-temporal order filled with empirical evidence which can only be observed from without by the dispassionate eye of the neutral researcher. In the end, the issue here is not whether there are indexes of subjectivity in modern biblical scholarship, but how scientific biblical knowledge combined with a racial logic desacralizes the Other, both in the ancient world (e.g. modern Orientalist discourse) and the contemporary context (e.g. Social Darwinism).

In the Western context, from the seventeenth century onward, scientific knowledge has considered vision as the master-sense, being what Michel Foucault terms, “the sense by which we perceive extent and establish proof.” On the pretext of scientific observation, several minoritized populations have been deemed diseased, criminal, and infrahuman (e.g. U.S. chattel slavery, immigrant detention, and holocaust). Within a Western context, scientific analysis has valorized a Cartesian perspective in which the self is seen as subject and object. Combined with a racial logic, this view works to intensify the distance between self-subject and self-object to the extent that the Other is fully objectified. Hence, with the Other racialized on the pretext of scientific objectivity often make him or her prime targets of state sanctioned violence or vulnerable to what Paul Gilroy terms “the desacrilization of the body.”

Foremost among the assigned readings that help retool students’ interpretive instincts is Edward Said’s Orientalism. Secondly, I assign students a final writing project in which they write a 10 page academic paper, contextualizing/historicizing early modern historical biblical scholarship of the Torah/Pentateuch (the period of research fall between 1800-1950). In this paper, they are required to interrogate the underlying values and assumptions (e.g. Western ‘civilizing missions’ and Orientalism) upon which early modern interpretations of the Pentateuch were based. Here they are to include information about the social, religious, and political loyalties of the biblical scholar, teasing out his or her underlining national ideology (i.e. British, German, North American, or French). There discussion should also give examples of specific interpretations of biblical texts that indirectly or directly reinforce Western binary divisions, such as West/East, civilized/savage, male/female, black/white, developed/underdeveloped, modern/archaic, scientific/superstitious, and superior/inferior.

With this final paper, students were surprised to encounter numerous examples of blatant racial and sexist rhetoric in the foundational texts of the modern study of Old Testament. From this exercise, the majority expressed a renewed sense of interpretive ethics whereby they are more careful not to empower scholarly readings that may perpetuate oppressive racial and gender binaries. Most satisfying is to have these students carry their renewed critical instincts into my exegesis courses. They more readily identify what has been rendered unseen.

Gregory Cuéllar holds a PhD in Hebrew Bible from Brite Divinity School at Texas Christian University, Fort Worth. He holds a Master’s degree in Divinity from Southwestern Baptist Theological Seminary and a Bachelor’s from Texas A&M University, Kingsville. A major focal point in his research lies at the intersections of religion, migratory aesthetics, borderlands and postcolonial trauma. He is currently researching the social, political, and ethical contours of religious services provided within state contracted family detention facilities. He is the author of the monograph, Voices of Marginality and several articles on Hebrew Bible and migration in the context of the U.S. Mexico borderlands. In terms of advocacy work, he is the co-founder of a refugee artwork project called, Arte de Lágrimas (Art of Tears). Through a traveling art exhibit of original children’s art, this project engages both the politics and the lived experiences of Central American migration to the United States.