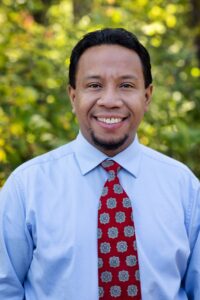 Teaching with an Accent: Sounding Otherness in the Classroom

English is not my first language. The first time I went to an English-speaking school was in Baguio City, Philippines, in 2003. I was nervous about learning in a language that is not my own. Would I manage? And what if I failed? These questions haunted me as I boarded the airplane from Jakarta to Manila.

It’s the first semester, and so I take a systematic theology class. As the professor is teaching, a question burns in my mind, something I really want to ask him about. I gather my courage and raise my hand. The professor sees me. He turns to me and says, “Eka, do you have a  question?” But as he turns his—and everyone’s—attention to me, I feel as if the world is spinning beneath me. The words I’d planned vanish from my brain. My feet shake. My whole body explodes with heat. I’m nervous and embarrassed because everyone’s looking at me, waiting to hear my question. I try to open my mouth but no longer know how to express my question in English. Seeing me struggle, the professor patiently says: “It’s okay. You can do it!” Knowing that he understands my linguistic limitation helps, but it nevertheless takes me a few minutes to articulate my question.

The memory of this experience still vividly reminds me that learning in another language is not at all easy. It takes a lot of bravery to do it.

Fast forward to 2017. I am still pursuing my doctoral degree at Vanderbilt University. But on this day I’m teaching a Sunday school class at a local church. A guest (a white man) is in the class, wanting to learn from me. While I’m talking, I notice his discomfort. Finally, he speaks up: “I don’t understand what you’re saying. Your accent is too strong.” I’m totally embarrassed. I pause and collect myself, then smile and continue. I never saw him again.

Not long after this experience, I have a conversation with an established scholar who teaches at a major seminary in the US. He is from an Asian country, and he too speaks English with an accent. He tells me that in his first years of teaching, some students did not want to take his class because they didn’t like his accent.

Time to flip the script! When I was in the Philippines, I met a man from Alabama who spoke with a pronounced Southern accent. Sometimes that accent, plus the speed at which he spoke, meant that I couldn’t understand what he was saying.

Accent can indeed be a barrier to communication. Recognizing this taught me to respect this Alabamian and his linguistic background. Instead of expecting or even forcing him to speak with an Indonesian, Filipino, or Korean accent (which I readily understand), I pushed myself to accept his otherness and his difference, and over time I learned to understand his speech better. Rosina Lippi, a novelist and linguist, once told the Mercury News, “[A]ccent is often overrated as a source of communication problems… Often, what people perceive to be an accent problem is really due to other biases.”[1]

Indeed. Linguistic prejudice is real. People who study language know that everyone has an accent. English accents take all kind of forms, even among native English speakers. An Australian accent is different from a Singaporean accent or an American accent. However, some accents are considered acceptable, and others are not. Who determines the acceptability of an accent? The issue is not whether one has an accent or not, but whether one’s accent is perceived as desired, or is frowned upon as “less than,” “foreign,” “uneducated,” or “uncivilized.” It is merely the hearer’s unfamiliarity with it, their discomfort, their sense of superiority, that deems an accent to be “foreign.”

Now of course teaching requires oral linguistic performance. A teacher has to stand in front of the class and speak. In this context, accent in teaching is inevitable. It is an embodied performance because it involves the movement of one’s tongue, the intonation of one’s voice, and one’s breathing. Since our body is habituated in a certain linguistic environment, speaking with an accent is entirely inevitable. All speech is accented, always. Embodied teaching means teaching with an accent. In this sense, a teacher comes with their own unique accent. The question is: What accent is acceptable in a classroom?

I teach at a seminary whose students come from many different places. We have a few international students as well. Whose accent should I use as a teacher? A Nigerian student from South Africa has a very different accent than a student from New York or a student from Tennessee. Should I use a Nigerian accent or a New York accent or a Southern accent? I decided to stay with my own accent, one that is shaped by Bahasa Indonesia underneath my English performance. Like Josephus, the first-century Jewish historian who admitted that he had a hard time attaining precision with the Greek accent because of the habit of his mother tongue (Jewish Antiquities XX.263–4), I too feel such a distance with English, and the habit of my mother tongue affects my English pronunciation. I have learned to embrace and refuse to be embarrassed by it. My accent is who I am. My accent tells a story of migration from Indonesia to the United States. It signifies the presence of otherness in my classrooms.

I suggest that instead of seeing accent as a barrier to communication—for example, when students refuse to embrace the otherness of their teacher’s accent—teaching with an accent can also enrich our classrooms. Teaching with an accent clearly embodies otherness in the classroom. Such otherness challenges students to examine their linguistic prejudices or biases. It is not only the face of the other, but also the sound of the other that comes to them. It transgresses their familiarity, their bubble. It prompts them to ask themselves: Do I need to embrace it or reject it altogether? And in asking that, perhaps that difference will also prompt them to recognize that in rejecting or embracing an other accent, they are also rejecting or embracing an other self, an other’s story. For accent represents one’s story. As a legal scholar, Mari J. Matsuda, puts it:

To put it differently, the act of shutting down an accent is a violent erasure of one’s story, one’s identity, one’s self. Students’ reaction to a teacher’s accent will tell whether or not they are willing to welcome diverse stories, backgrounds, and knowledge productions. A teacher’s accent can function as a catalyst for the classroom’s open engagement with difference.

Ekaputra Tupamahu is Assistant Professor of New Testament and Director of Masters Programs at Portland Seminary. He received his Ph.D. in New Testament and Early Christianity from Vanderbilt University. He is the author of Contesting Languages: Heteroglossia and the Politics of Language in the Early Church.