Home > Resources > Blog > Race Matters in the Classroom > Race Matters Outside the Classroom
Selected Items Select an item by clicking its checkbox
Actions for selected results:
Sign-up to receive email alerts when new blogs are posted Read our Blog Series List of  Bloggers 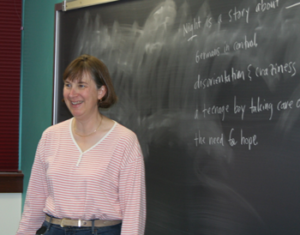 Race Matters Outside the Classroom

The casualties: More than 7,000 Jewish shops along with 1,574 synagogues damaged or destroyed. One hundred Jews murdered; 30,000 imprisoned in concentration camps. They were the first victims of a racial purge that went on to claim more than 6 million lives.

Now, 76 years after Kristallnacht, I am preparing to lead the Holocaust Studies Service-Learning Project (HSSLP). The HSSLP was founded in 1999 by students in a first-year seminar on the Holocaust. They wanted to take their learning out of the classroom, to the places where the Holocaust occurred. The ultimate result: a half-credit course that culminates in a trip to Poland. Through service-learning in Wrocław, Kraków, and Auschwitz, students forge multi-cultural connections with Jews and Christians, Germans and Poles—all in the shadow of the most notorious genocide in modern history.

I’m going to Poland for the fifth time because I’ve seen how service-learning opens students’ eyes to the effects of oppression and the need for social justice. I’m writing this blog entry now because if service-learning works for confronting anti-Semitism in Poland, it might also work for confronting racism in North America. Service-learning works in general because it facilitates learning within relationships. Its three components engage the whole student: mind, body, and emotions. Those three components (as described by the National Service-Learning Clearinghouse) are academic instruction, community service, and reflection.

Academic instruction orients our students to the grim history of the Holocaust in Poland. We read Doris Bergen’s War and Genocide; we learn about events in Breslau (Germany) and Kraków (Poland); we interact with survivor memoirs; we host a survivor on campus. 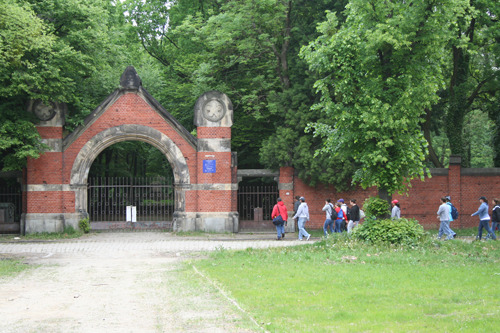 At the end of the semester, we leave the classroom and fly to Poland. We spend four days serving the Jewish community of Wrocław (formerly Breslau) by helping to clear fifty years’ worth of debris out of their forty-acre cemetery. Meanwhile, we continue academic instruction by discussing two books about the Holocaust in Poland. Jan Gross’s Neighbors lays bare the vulnerability of a minority sub-culture; Elie Wiesel’s Night testifies to the death of his God.

We then spend the weekend in Kraków. We tour the Jewish quarter. We visit the site of the labor camp at Płaszow. We’re especially eager to see Oskar Schindler’s Factory, which lacked any kind of commemorative marker until HSSLP founders arranged to mount a plaque. 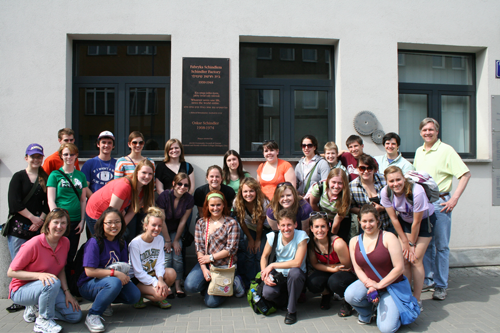 Finally, we journey to Auschwitz-Birkenau, the world’s largest cemetery. Here there are no graves. Only 425 acres of railway line, bunkhouse remains, gas chamber ruins, and ash pits.

Service-learning about racism isn’t easy. It’s often difficult for students with Jewish and Polish backgrounds to discuss Neighbors together. A story about Poles slaughtering their Jewish neighbors makes everyone feel vulnerable. But the difficulties are outweighed by the rewards: cleaning the graves of Breslau Jews; working together with volunteers from Germany; adding weeds and branches to the “pile of Jewish-Christian-Polish-German-American friendship”; celebrating Shavuot together with Wrocław Jews in their restored synagogue; joining our German friends in the Edith Stein house to hear a Holocaust survivor’s story.

Our trip generates more than enough fodder for reflection. Every day, students write in their journals. They take turns contributing to the trip blog. I’ll end this blog by sharing some of what they’ve learned:

“Uncovering the graves was such an amazing experience. These graves probably haven’t been seen for fifty or sixty years. By cleaning the graves, I felt like we were honoring these people once again, especially now that there is no one in Wrocław to remember them anymore.” 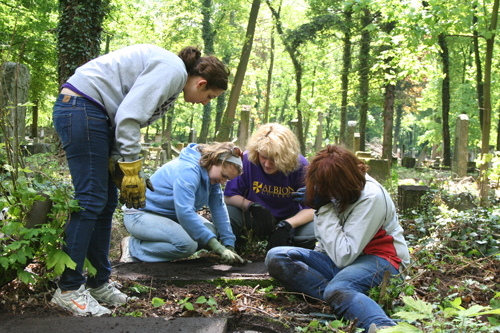 “It was hard to see and hear everything about Auschwitz and know it did not change the world. There are still genocides and dictators and power-hungry people and countries. There are still racial jokes heard and said, still signs hung and destruction done.”

“I started this trip nervous and unsure of what to expect. I end this trip a changed person, a witness to the history and consequences of what may have been the worst example of human behavior in modern history. Since I have no personal connection to the Holocaust I am surprised by the level of closeness I now feel with it. I am not Jewish. I had no family members who were victims. But just by being a member of the human race, I am connected to the Holocaust, for better or for worse. This is the most important thing I learned from this trip: every human being, regardless of race, religion, nationality, or belief system has the responsibility to learn about and remember the Holocaust in order to realize what humans can do to each other and in the hope that what has happened before and still happens today can be prevented in the future.”