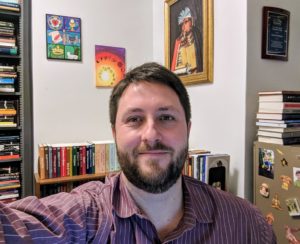 Like many parents of small children, I responded to the COVID-19 crisis by subscribing to Disney+. One of my first dives into animated nostalgia was with the Pixar short Presto, which initially preceded showings of the 2008 masterpiece WALL-E. I watched with bemused horror as the magician, resolute on performing for the packed house, ignores the obvious pleas of his rabbit for a simple carrot and experiences greater and greater injury as he tries to coerce the rabbit to do his bidding. I was glad my children were already asleep. Before long, I was thinking about how some of my own attempts at improving my instruction over the years might sadly resemble the flailing and desperation of the magician Presto.

Our students are hungry, and we risk failing them–and getting hurt in the process–if we lose sight of this. They are hungry for connection, for community, for security, and yes, for learning. I want to feed their hunger, to give them the carrot that will hold them over until something more substantial is available again. But now that all our interactions have been digitized, I have found myself a bit adrift, realizing that much of my impact in the classroom depends on a persona that I perform. The shift to remote teaching and learning has forced me to reckon with my lingering assumptions about students as an audience.

I have always seen myself as a lifelong learner, and a fellow-learner with my students. But now, more than ever, I have become aware that I still often treat students like an audience who has paid good money for a seat and impatiently await my magic making. But, like the animated magician who pulls off his trick only when he finally listens to his rabbit, I am realizing that in this crisis teaching and learning works best when students are full partners in the enterprise. My Presto moment might just be responsible for a lasting shift in my pedagogy toward students as collaborators, even co-conspirators.

My religious studies courses serve exclusively general education students, so I cannot depend on students’ background knowledge or preexisting curiosity to energize the classroom. For students without personal connections to any religious practice or traditions, finding religious cultures interesting often depends on finding me interesting. I found in my early years as a full-time instructor that sharing my inner “history nerd” captured the imaginations of only some students. Watching a video tape of myself teaching was a formative moment in my professional development during my first semester on the job. My best attempts at good, provocative, open-ended questions fell flat, and I could see on tape how the intellectual energy I felt did not come through for the students. So I worked on conveying more excitement through energetic physicality, modeling inquiry not merely through thoughtful questions, but also through emphatic gestures and wide variations in the volume and tone of my voice. I stopped being afraid to say–loudly–“What?!” to my own attempts at interpretation.

Students responded. Visits to my office hours increased. Course evaluations slowly improved. A persona that initially struck me as a farcical performance became less forced, more authentic. I am sure that I improved other skills as an instructor, but the energy I put into the performance seems to have opened up my creativity as well as my sensitivity to students. To perform in this way forced me to imagine the intellectual and emotional position of my students. It made me seem more vulnerable. It helped me make stronger connections to students. Demonstrating how willing I was to challenge myself opened up new possibilities for students to challenge me, too, and to ask potent questions about religious texts. My new instructor’s persona did not suit all pedagogical circumstances, but it became an important tool in my belt. Just as important, this new professorial habitus made me feel differently about teaching, in ways that improved my instruction in other ways, some measurable and tangible, others not.

Overnight, Covid-19 took away my stage, my audience. Initial feedback suggested that nearly 1/3 of my students new quarantined lives would not accommodate a steady schedule of video conference discussions, so I opted for asynchronous approaches. Optional video office hours gave me some opportunities to speak with students face to face, but not every student would “attend” or watch the recordings. I found I could not fit all my expressiveness into a small box on a tablet screen. Discussion forums facilitate authentic discussions of our shared texts, but it becomes impossible to gauge quickly the reactions and comprehension of thirty students to a 100-word follow-up post on one thread among dozens in a forum.

But I cannot, like the magician Presto, continue to perform and prestidigitate for an audience because that audience has more important things to worry about under the present circumstances. If learning is to happen now, we must be even more attentive than ever to what students need. On the one hand, this has meant above all simplifying, paring away inessential elements in order to get to the core of my objectives. I have cut down the length of reading assignments; no longer convinced that there is virtue inherent in testing students’ ability to find the important passages in a challenging text, only then to discern meaning in them. I have cut down discussion questions from four of five to one or two as students are discussing asynchronously need a focused conversation so they aren’t talking past one another.

But it has also meant jettisoning performance in favor of collaboration, in and through the humble discussion forum. In other words, I have been challenged to accommodate and facilitate students’ intellectual agendas rather than skillfully molding them to my own. This means asking authentic questions, but it also means responding authentically. Without my in-person performance of classroom leadership and inquiry to subtly redirect, I have had to be more honest about when an answer is off topic and needs clarification,. Students’ links to videos or blog posts on a topic, drawn from corners of the Internet I never visit, have forced clearer and more effective conversations about evaluating sources (and about the differences between scholarly and other sorts of discourse). I have embraced the leveling effect of having my replies treated the same way as my students’ by a democratizing Moodle interface. And I have shared my genuine surprise, sadness, laughter, and joy at the insights and compassion students have expressed in plain-text prose of 100 to 250 words.

In response to the crisis, I have stopped performing and started dialoging more thoroughly than before. It is an experience that I hope I will be able to translate back into face-to-face instruction, whenever that should return.

John W. McCormack is Assistant Professor of Religion at Aurora University, where he teaches a wide range of courses in the history of Christianity, world religions, European and Latin American history, and ethics. He holds an M.A.R. from Yale Divinity School and a Ph.D. in History from the University of Notre Dame. His research interests include political and religious culture in early modern France; European encounters with the religions of Asia and the Americas; and the history of emotions.