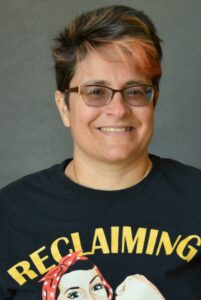 Teaching in a two-person religion program at a liberal arts college means you have the opportunity to teach in your field of study, and also in other areas of interest and expertise. It also means your students range from majors and minors to those seeking a general education course. For me, this has meant I teach primarily courses on various religious traditions, including Islam, Qur’an, Asian Religions, and now one on Islamophobia, as well as writing seminars around the topics of gender and race. While the content of these courses lend themselves to discussions that fall under the category of “other,” “diversity,” and other codes for non-dominant traditions, I would argue that the way we teach this content matters as much as, if not more so than, the content itself. To that end, I think a diversity-infused course should not be measured by its content so much as how that content is conveyed.

I wish I could say that I knew this, or knew how to accomplish this, when I began my teaching career, especially as it seems so obvious to me now. As luck would have it, a few years ago I coordinated a workshop with a colleague on “demystifying diversity in the classroom,” and we brought Kyana Wheeler and Fran Partridge to help moderate our conversations. In that context, I learned how better to talk about race, whiteness, and white fragility, and I gained some techniques for creating classroom spaces where these conversations could take place. Both in terms of pedagogy and interpersonal connections, it was one of the most eye-opening and liberating experiences that I have had.

The facilitators introduced us to a couple of exercises that had us examine our own position in society. We filled out worksheets identifying the various “isms” including sexism, ableism, just to name a few. Additionally, we identified privately our own places of privilege and those of oppression, for example, based on gender, sexuality, and socioeconomic status. Of note, Kyana Wheeler did not include race in these exercises and when we had finished our intense and engaged discussions, she asked us to add the layer of race and note how much worse the discrimination would be. All of this took place after we had privately taken implicit bias tests online. Leaving race out until the end for a group of predominantly white instructors was for me a very powerful demonstration of not only our own positions in the world, but how we talk about race, racism, whiteness, white fragility, and white privilege. The bottom line is we don’t; and we are very uncomfortable when we do.

In the semester following this workshop, I taught a first-year writing class under the theme of white fragility focusing on issues of race and gender. In addition to readings on whiteness, white fragility, and doing race, we engaged in discussions about the book, Pushout: The Criminalization of Black Girls in Schools, by Monique W. Morris. The students, predominantly white, engaged in conversations about the intersectionality of race and gender. We were able to do so toward the end of the semester with minimal defensiveness, I think, because we had engaged in the exercises described above in the first half of the course. Rather than thinking of them as one set of exercises to set the tone for the course, I conducted these self-awareness practices throughout the course as reminders of our own positionality. During the first week, the students engaged in identifying the oppression at work in particular scenarios. Another week, they took implicit bias tests. A week later, they engaged in discussions about where they felt privilege and oppression. I borrowed the technique of leaving out race until the end. It seemed to work.

Currently I am working on a course on Islamophobia and want to move away from catering to white privilege or the comfort of non-Muslim students. Based on a second takeaway from the summer workshop, specifically that race and racism are the most powerful underlying factors of most if not all forms of oppression, I believe a course on Islamophobia must engage in discussions of anti-racism. I have decided to take the tools of self-examination with respect to race and racism that successfully created a space for critical discussion of the plight of black girls in the US school and prison systems, to a course that teaches against Islamophobia. Furthermore, I believe that any course, even ones that don’t deal explicitly with racism or other forms of oppression would benefit from these activities as they help us to understand our place in the conversations, and who we might be leaving out.