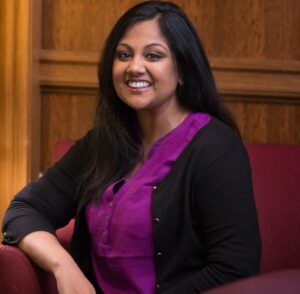 During our close reading of The Letter from Birmingham Jail, he defiantly asked in front of the whole class, “If you can force people into complacency, then segregation works, right? Society still functions.” I froze for a second, absorbing the gravity of the moment. My mind immediately calculated the multiple layers of that remark made within the complicated sociopolitical climate of the 2016 election season. This young white man was not just challenging Martin Luther King Jr.; his tone was intentionally challenging me as an Indian-American woman. Why? What was informing his challenge? The tension in the room was palpable, particularly as the students of color waited with bated breath for their professor’s response.

This spontaneous internal calculation produced an answer that still feels like a moment of grace. After an initial pause, I responded,

I could sense a collective sigh of relief in the room as the student’s initial defiance melted into greater openness. Another student immediately jumped in to offer her perspective. The discussion continued.

Occurring within the first three weeks of my first year of teaching, this moment taught me to recognize that how I handle such tension either builds or destroys my credibility for the rest of the semester. While I intuitively prevented an escalation of violence by avoiding any kind of us versus them binary on the basis of race and turning all the students back to the text and shared content of the course, I sought resources that could aid me in understanding the role of embodiment and visceral responses in the classroom. In his book My Grandmother’s Hands: Racialized Trauma and the Pathway to Mending our Hearts and Bodies,[1] Resmaa Menakem argues that racism and white supremacy cannot simply be addressed through intellectual conversation. Rather, the discomfort we feel about these themes reveals how they live and breathe in our bodies. If we are born in the US, our bodies reflect trauma responses surrounding the myth of race. In the classroom in particular, racialized trauma can show up in heightened hypervigilance connected to a fight, flight, or freeze response that interrupts normal cognitive pathways. For example, the students of color in the classroom example above expressed this alarm when they waited with bated breath for my response. They were only able to relax once the questions were answered honestly without further harm being committed either against them or their peer.

Menakem also proposes the idea of metabolizing trauma, which is especially helpful in preparing for these visceral moments when they occur in the classroom. First, as educators, we must recognize the intersection of our own social locations with those of the various students who make up our classes. Not only will each student relate to the content of the course from different social locations, but such social locations will involve different visceral entry points when the topic of racism is involved. Second, we must discern if our pedagogy is engaging in dirty pain or clean pain. Dirty pain is the pain of avoidance, blame, and denial. The classic example of dirty pain, Menakem argues, is “white fragility.” When talking about racism and white supremacy, white fragility is often viscerally expressed as a reflexive, protective response by which a white body avoids the pain or experience of racial trauma. Clean pain, on the other hand, is pain that can build a capacity for growth. Such pain helps us to engage our body’s integrity and tap into our embodied resilience by moving through painful realities with honesty, step by step. Accepting clean pain has two different effects. For white bodies, it allows them to confront their collective dissociation and silence. For bodies of color caught between white supremacy and anti-blackness in this country, clean pain allows for honesty regarding how these ideologies shape identities and forms of belonging in false ways. The wisdom of this approach, however, is that while all pain hurts, clean pain promises to heal generations so that we do not pass this visceral trauma on to our students.

After being exposed to these fundamental concepts of racial trauma theory, I no longer fear these tense moments or see them as aberrations that distract from the lesson plan of the day. Rather, by skillfully attending to them with an awareness that the classroom asks us to be engaged in mind, body, and spirit, such moments have the capacity to heal by showing how we may better engage the hard conversations.

Jaisy A. Joseph is an Assistant Professor of Systematic Theology at Villanova University. With interests primarily in ecclesiology and theological anthropology, her main areas of research involve understandings of unity and difference in the Catholic church, how these definitions have shifted over the centuries, and how erroneous expressions have wounded the bonds of communion between different peoples. These differences are not only intercultural and ecumenical, but also involve the almost-invisible ancient Eastern Catholic churches that have been present since the first centuries in North Africa, the Middle East, South Asia, and Eastern Europe. She is also committed to understanding how globalization and migration have brought all of these differences to the United States in the past fifty years and how these diasporas influence understandings of catholicity for the church of the third millennium. Aside from the academy, she is very involved in the lay ministry of the SyroMalabar Catholic Diocese of Chicago, which spans across the United States to unite nearly forty parishes and forty missions. Her primary concern is to work with the emerging second generation of this immigrant community, particularly regarding issues of identity, domestic violence, and intergenerational healing.