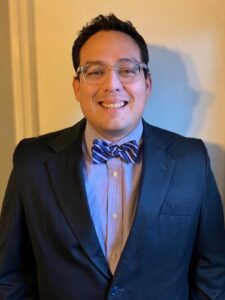 Music as a Way to Build Bridges in Religious Education

During my teaching experience in Zambia, music became an important part of the day-to-day life of my students’ coursework. When I first asked the students to share about things they valued from their own culture, one of the elements they mentioned was their love for music. As I was to later find out, this love of music did not refer to music theory or a song being played. Rather, it is a way of living out their culture and experiencing life through music. Music was everywhere in Zambia: in my students’ homes, in their schools, in their churches, and in their houses of worship, for example. Music was to be experienced and led to a form of embodiment, or at the very least recognizing that as human beings we are embodied in our everyday visceral reality.

I also found myself making connections to my own Latinx ethnicity. For example, many individuals of Latinx heritage also share an African heritage. Several countries in Latin America have been marked by racial intermixing between Africans, Amerindians, and Europeans. There is even a growing field of study of the Afro-Latino experience. I recently did a DNA test and discovered that at least 10 percent of my DNA is African. It was surprising, but in my Latinx experience it was a heritage that was suppressed and ignored, although the cultural influence was undoubtedly there. I thought that perhaps engaging music would be a way to connect my own heritage to the experiences of these students in Zambia. And concomitantly, perhaps the use of music could lead to an embodied experience in the classroom where we could build bridges between our cultures, ethnicities, and races.

I knew that I had to improvise in my lesson plans to accommodate this important cultural element in the classroom. I asked each student to prepare a song for one of our teaching sessions during our time together. Because I had 12 students, I asked some of them to pair up. I was specific and asked for songs that they sing for worship in their own country and that were relevant to the course content, but they had the freedom to choose the song. I encouraged them not to use digital sources, but to sing or play the songs in their own way.

When the first student presented her song, her voice carried over the class. It was an old hymn that the students immediately recognized (I did not). The students all joined together in their singing. Their bodies swayed and some raised their hands. In this expression, their bodies were present, involved, and recognized. It brought to memory the book by Estrelda Alexander, Black Fire, where she traces the importance of African spirituality in Pentecostalism and describes the body-mind-spirit correspondence of their worship.[1] For my students, music was a corporeal and corporate experience. As an instructor who was present in this environment, I was stating by my mere presence, “Yes, you and I are different; but we can enjoy these musical arrangements together. We can share in this special moment. We are together in this class. We are on equal footing.” Music gave them a legitimacy to express themselves. In listening, I demonstrated that they were valued. Their contributions as authentic as they were to their context were not dismissed or looked down upon, or even looked over. Their voices mattered. Their culture mattered. Their skin tone mattered.

I was deeply appreciative of the resourcefulness of my students despite having little or no resources. Music was one way that this resourcefulness played out. For example, the students sang together. Sometimes, it seemed they were singing two different melodies, yet their differences complemented each other. They would also use their hands to clap or use sticks to keep the beat and rhythm. I was amazed at how they all wanted to participate in this experience. If they didn’t know the lyrics, they hummed along.

After the singing, the class seemed to come together. Not only were student’s minds engaged in the course content, but their bodies, attitudes, and culture were involved also. I concluded that music is a wonderful resource. It is able to change a person’s mood. It is able to create a certain ambiance or environment. It is also something that is shared if everyone is listening to the same thing. All the participants move to the music together. The classroom was not just a foreign Honduran-American telling students how to think or what to think. Rather, it created space for meaningful engagement.

As I return to the US, I want to make music a part of my courses. Whether we sing old hymns or modern music, it is important to honor the cultures, ethnicities, and races of my students. This is one way to engage them. I know students may have reservations about singing, but at the very least they can bring a video clip to play in class through web services like YouTube. Whether it is online or in person, sharing in music is an activity that all can participate in