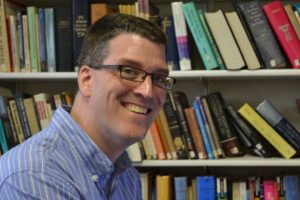 My most recent tweet (of almost ten thousand) was 40 weeks ago. My most recent Facebook status update (except for a brief "thank you" for birthday wishes in July) was 46 weeks ago. The previous three years, however, I have taught my main introductory course, "Introduction to the Hebrew Bible," as an open, freely-available, online event built almost entirely on social media, especially Twitter, WordPress blogs, and Google Docs. This was the Open Old Testament Learning Event, or "OOTLE." My use of social media in higher education was based on a belief in the power of making for learning, and on a utopian vision for the internet that was based on my own experience. Eventually, the failures of the major centralized social-media platforms to proactively account for systemic abuse of marginalized users led me to abandon our pioneer outpost of open learning, and to retreat with my students back into the familiar confines of "the devil I know," the closed learning management system or "LMS."

Many educators will have some familiarity with the learning theory "constructivism" (sometimes "constructionism"). According to this model, learners do not simply "acquire" knowledge, but rather always "construct" knowledge by synthesizing their existing understandings with new information or insights. Less well known, however, is that according to a constructivist model, this knowledge-making is more likely to occur where learning happens socially and where learners collaboratively build artifacts that are publicly shared. As the internet age took hold, and learners began increasingly to build their knowledge in a world of information excess rather than a world of information scarcity, it was often remarked that content on the internet was composed by perhaps 1% of internet users. Perhaps 9% of users interact with this content, and some 90% only passively consume content. This is sometimes called the "1% rule" or the "90/9/1 rule." From computer science to the humanities, educators began to embrace the power of "maker culture" to unleash the potential of constructivist learning in individuals, and to remake the internet in the image of the whole body of its users. It was in this context that the use of social media in higher education began to spread like fire: classroom Twitter "back channels" or weekly synchronous "Twitter chats"; blogging assignments on open web platforms like WordPress; presentation or digital storytelling on YouTube; and Facebook groups and pages.

Then in 2014 came "Gamergate," a campaign of organized harassment against female game designers and game enthusiasts, including frequent credible threats of sexual violence and murder. Gamergate provided a playbook for white supremacist organizations and eventually, it seems, even for Russian interference via "troll farms" in 2015-16 U.S. political discourse on Twitter, Facebook, and YouTube. ("Trolling" describes skillful, media-savvy practices in derailing or redirecting discourse, whether for pleasure, malice, or profit.) Even among social-media users apparently uninvolved in these large events, in became clear that the codes of conduct and anti-harassment policies dictated by the young, white "tech bros" of social media (Jack Dorsey of Twitter, Mark Zuckerberg of Facebook), could not provide marginalized users anything like the safe environment enjoyed by privileged users less likely to be targeted. This remains the case, skewed as these policies are toward favoring "free speech" in an absolute sense and leaving users to block malicious actors as best they can . . . only possible, of course, after the malicious acts have occurred. Even we relatively privileged users became accustomed to weary acknowledgements that "of course Twitter is a cesspool, but . . . " Eventually, "But. . . “ became for me, and for many educators in my circles, "But what?" and then "But nothing." It had become impossible to offer my learners a reasonable guarantee that they would enjoy equitable social-media experiences, regardless of how they chose to present their race, gender, sexual self-understanding, class, or other differences.

As I consider shepherding learners again into the social-media space ("not yet, not yet"), I remain optimistic about decentralized platforms like Mastodon. It is clear that the "one size fits all" approach to codes of conduct and anti-harassment policies (as on Twitter and Facebook) is untenable. On Mastodon, a radical free-speech, no-holds-barred community can have its minimalistic code of conduct, while a more proactive, highly-moderated community can choose to federate with that group, or not. I have not given up on a commitment to learning via collaborative construction of publicly available artifacts, but I am once bitten . . .and will twice be shy of any monetized, centralized platform.

Brooke Lester is Assistant Professor of Hebrew Scriptures and Director of Digital Learning at Garrett-Evangelical Theological Seminary. Brooke lives in Evanston, Illinois, and loves to practice the Korean traditional martial arts of Taekwondo and Hapkido. In the world of pedagogy, Brooke currently explores the crafting of text-based interactive-fiction games for teaching and learning biblical studies. In the world of Hebrew Bible/Old Testament, Brooke is wrapping up his journey with the study of literary allusion, and beginning to return to an earlier love, the study of Israelite religion in its ancient West Asian contexts. He is the author of Daniel Evokes Isaiah: Allusive Characterization of Foreign Rule in the Hebrew-Aramaic Book of Daniel (Bloomsbury/T&T Clark, 2015), and of Understanding Bible by Design: Create Courses with Purpose (Fortress, 2014). Brooke is on haitus from social media, but can be found occasionally at http://brookelester.net.