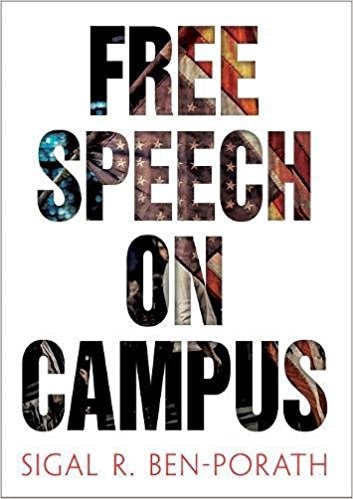 In Free Speech on Campus, Sigal R. Ben-Porath outlines her focus at the outset: “I offer a framework for thinking about free speech controversies both inside and outside the classroom, shifting the focus away from disputes about legality and harm and toward the practical considerations linked to education and inclusion. I attempt to provide readers with strategies to de-escalate tensions and negotiate highly charged debates surrounding trigger warnings, safe spaces, ...

In Free Speech on Campus, Sigal R. Ben-Porath outlines her focus at the outset: “I offer a framework for thinking about free speech controversies both inside and outside the classroom, shifting the focus away from disputes about legality and harm and toward the practical considerations linked to education and inclusion. I attempt to provide readers with strategies to de-escalate tensions and negotiate highly charged debates surrounding trigger warnings, safe spaces, and speech that verges on hate” (3).

In order to accomplish her task Ben-Porath uses the first four chapters of her book to describe the “current tools” used to protect free speech and the “common myths” that cloud leaders’ understanding of the problem (7-28). She offers a “framework for inclusive freedom” (29-46) and notes the ways in which that framework can be used to respond to “intellectual and dignitary harms. . . without suppressing speech” (47-84), and then she describes the ways in which the same approach can be deployed in the classroom (85-102). In the conclusion to her book she then shows how conflicts that she has cited elsewhere could have been resolved by relying on “inclusive freedom” (103-128). The concrete illustrations include the debate over Halloween costumes and safe spaces at Yale (13); racial equality in Missouri (13-14); trigger warnings in Chicago (14); and controversial speakers at Berkeley and Middlebury (15-17).

Ben-Porath depicts three tools that have been used by colleges and universities to respond to such conflicts: Some have appealed to the First Amendment and the freedom of speech; others have appealed to academic freedom; and still others have used “speech codes” to control dialogue on campus (18-20). These tools “pull in different directions” and Ben-Porath notes that there are subtleties on campus that often escape notice (21). Academic freedom, not freedom of speech, is the “core value” of America’s campuses – that commitment conditions the right to free speech, prohibiting things like plagiarism and the misrepresentation of the results of research, even if the First Amendment protects such conversation (20).

“Inclusive freedom” offers a different approach. It is based upon a commitment to two key principles: “First, a commitment to teaching and research can only be fulfilled in the context of an open-minded and intellectually honest environment” (74); and “Second, all members of the campus community must know that they are invited to participate in this pursuit” (74).

Readers of Ben-Porath’s work will have questions: (1) Is there a bright line between society’s concern with the freedom of speech and academic freedom on its campuses? If, as the author notes, university campuses are “both the mirror of American democracy and the window into its future” (8), can universities and society be so easily isolated? (2) Could issues of plagiarism and the misrepresentation of research results be ethical matters and, therefore, unrelated to the question of how freedom of speech and academic freedom differ and overlap? (3) More importantly, can Ben-Porath be so sure that the strife on America’s campuses can be avoided or defused? Those who perceive themselves as the architects of a new social order or who see societal battles as a zero-sum game will not be easily dissuaded. (4) Readers will also wonder if Ben-Porath undermines her project by presupposing that the categories of harm and violence are appropriately applied to academic discourse. As long as one assumes that language can be violent, then opening discourse to contributions from diverse perspectives will always be constricted by the possibility that one will be charged with acting immorally. (5) Finally, on a practical note, readers will find that the author’s method is not as clearly outlined as it should be in such a brief treatment of the subject.

Questions aside, those who teach in North America will recognize some of the debates that Ben-Porath describes. The conflict that abruptly ended the deanship of Professor Elaine Heath at Duke Divinity School illustrates how intractable and bitter debates can be about these issues. For those who teach on seminary campuses, there are added layers of complexity. To one degree or another, issues of Christian community, formation, and participation in the life of the church are concerns unique to theological education. In addition, notions of belonging and academic freedom are conditioned in seminaries by centuries of debate over what makes for sound theology and authentic Christian community. For that reason, in the world of theological education, a solution to the volatility of conversation in the classroom and among its faculty is an even more urgent priority.

In Academic Freedom at American Universities,Philip Lee presents a convincing case for transforming higher education with respect to protecting and encouraging true academic freedom of professors – in both public and private university settings. In six chapters, Lee discusses: the crisis of academic freedom in modern universities and the American Association of Universities Professors (chapter 1), the AAUP’s first policy declaration in 1915 and its struggle to defend academic freedom (chapter 2), ...

Lee chronicles the shortcomings of constitutionally-based academic freedom and appealing to the First Amendment alone, which he seeks to demonstrate has failed to sufficiently protect public institution professors, while not even applying to private university faculty. Thus, Lee proposes an alternative remedy: “developing a body of contractually based academic freedom case law,” which will “greatly expand the ways that courts protect aggrieved professors when their interests diverge with their employers’” while also allowing for “the proper consideration of the custom and usage of the academic community as either expressed or implied contract terms in resolving disputes between universities and professors” (145-46). The author adds that this contract law approach would also entail the courts giving greater attention to specific campus contexts rather than seeking to create universal remedies that inevitably fall short of fitting certain campus settings.

Professor Lee’s research demonstrates substantial mastery of the subject matter and relevant materials – no less for matters dating from the pre-AAUP period through its founding and early years of development to its expanding influence and most recent iterations. Lee’s work evidences careful scholarship that includes extensive collecting, scrutinizing, and evaluating of various crucial events, court cases and findings, written opinions, and other relevant materials spanning the AAUP’s organizational history. Particularly insightful is the author’s discussion of the 1918 report on academic freedom in wartime and the report’s multiple contradictions to the 1915 declaration’s principles, culminating in actual “retreat from professional self-identification in deference to the government’s claimed needs during wartime” (33). Also instructive is Lee’s examination of the shift in focus and language between the 1925 and 1940 Conference Statements – mainly from a prescriptive list of university “don’ts” to descriptive university teachers’ rights with the latter’s garnering of widespread acceptance (47) and approval within the bounds of most religious schools as well (64). The author’s writing style is consistently clear and engaging – no mean feat considering the rather technical and procedural materials encompassing much of this book.

Philip Lee’s Academic Freedom at American Universities presents an important argument for an alternative – contract law – foundation for professorial freedom in the academy. I recommend the book as a valuable resource for all public and private higher education institutions, particularly their faculty and executive administration.