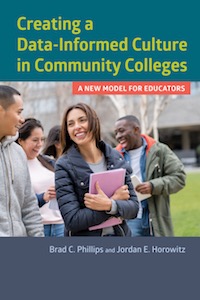 Armed with strong backgrounds in institutional research and effective educational leadership, Phillips and Horowitz provide educators with an excellent resource for improving academic success with proven data use strategies and practices for community colleges. A central, uniting focus of the book is the need for information to be contextual, “useful, useable, and actionable” (9), and the need to enlist the widest number of stakeholders within its ecosystem. Administrators, researchers, faculty, and ...

Armed with strong backgrounds in institutional research and effective educational leadership, Phillips and Horowitz provide educators with an excellent resource for improving academic success with proven data use strategies and practices for community colleges. A central, uniting focus of the book is the need for information to be contextual, “useful, useable, and actionable” (9), and the need to enlist the widest number of stakeholders within its ecosystem. Administrators, researchers, faculty, and staff are encouraged to be co-partners in cultivating academic excellence.

Rather than placing data at the center, the authors advocate for a model that places “the use of data” at the center. The book is divided into three sections: (1) “A New Model for Data Use,” (2) “Putting the Model to Work,” and (3) “Case Studies of Data Driven Reform.”

The first part outlines a new model for data use that is user-friendly, improves educational instruction, and maximizes student success, combined with intentional adaptation to those it serves. For example, “few educators want to [be] analysts; they want to be provided with useful information and assisted in applying it toward student success” (56). Attention is also given to analytics, behavioral economics, organizational theory and habits, and the role of emotion in decision making.

In the second section, Phillips and Horowitz reveal a data use model that is put to work removing obstacles to student success. Specific consideration is given to leading and lagging indicators and the employment of backward mapping that begins with the identification of lagging indicators or goals. Attention is then refocused on the leading indicators that influence them, and which a college has the ability to control and reshape in proactive ways. Lagging and leading indicators have the ability to switch places from time to time. Scrutiny is also given to disaggregation and how different demographic subpopulations can impact the design of programs, services, and policies. The authors make use of a four stage, continuous improvement approach for use of educational strategies that moves from assessment, to planning, to implementation, to monitoring, and back again to assessment (110). They believe that data should be processed in manageable bites and reflect an institution’s unique cultural context and problem areas (176).

When evaluating outcomes of particular programs or services, Phillips and Horowitz call for academic institutions to review all other policies and programs that may or may not have an impact, positively or negatively. When introducing data and discussing it educators need to make sure that the content is real, that they include moments of humor, that they engage with the data, and that it works towards a consensus in decision-making. Resistance is another key factor for community colleges to scrutinize. College staff often bring their “own history of belief and experiences to the process and accept only information that confirms those beliefs” (104). Helping people to move outside their comfort zones and embrace change can assist in creating a positive, data-informed culture.

The last section provides actionable approaches and case studies drawn from community colleges from differing socio-economic and ethnic settings that intentionally choose to embrace a data-informed culture and foster proactive uses of information for student success. A failing institution was among the colleges examined – it had been on the verge of being shut down by state authorities because of dissatisfaction with its academic quality and student success.

This book is more than a guide for interpreting data by academic researchers. It also provides a research-based, comprehensive, and practical approach for improving academic excellence in all areas, and amongst all segments of the college community. This book will help teachers of religion and theology to increase their classroom effectiveness – in lecturing and interacting with students.

Community Colleges have historically faced numerous challenges, many generated by the very nature of their missions. The three parts of this text flesh out the theory, research, and practice most germane to the history, current state, and future of the American community college, as well as the various student populations community colleges now serve. The three sections ask readers to understand (Part I: “Understanding Today’s Community College Campuses”), support (...

Community Colleges have historically faced numerous challenges, many generated by the very nature of their missions. The three parts of this text flesh out the theory, research, and practice most germane to the history, current state, and future of the American community college, as well as the various student populations community colleges now serve. The three sections ask readers to understand (Part I: “Understanding Today’s Community College Campuses”), support (Part II: “Welcome to Campus: Supporting Today’s Community College Learners”), and look closer at populations often underrepresented in higher education literature (Part III: “A Closer Look: Specialized Populations and Communities on Two-Year Campuses”).

John L. Jamrogowicz illuminates these challenges in his chapter, “Community College Economic Climate, Policy Landscape, and the American Graduation Initiative.” The AGI (American Graduation Initiative) spearheaded by President Obama “showcased community colleges as potential engines to drive the recovery from the Great Recession and a return of American dominance by increasing the proportion of the population with a college education” (19). Attempting to shoulder such a heavy ideological burden and with only $2 billion of the desired $12 billion for grants allocated, it is not difficult to surmise why community colleges continue to struggle to meet federal expectations.

Other chapters in Part I, such as “College Readiness and the Open-Door Mission” suggest readers look to the issues involved in the open-door mission: primarily, the need for remedial education and helping students persist to the completion of their programs. These authors cite the National Center for Education Statistics from 2011 which found that “more than 70 percent of students who first enroll in community colleges possess at least one factor and 50 percent possess two or more factors that are known to place a student at risk of not succeeding in college” (34). Procter and Uranis’s chapter on the role of technology on the community college campus also demonstrates how these institutions face a variety of resource challenges because they serve more students who may “lack a home computer and rely on the college for access to hardware, software, and Internet connectivity” (48). Financial woes, the necessity of remedial education courses, the challenge of student persistence, and students’ heavy dependence on college resources are just some of the realties those working with and inside community colleges must come to understand.

Support is a recurring theme in McFadden and Mazeika’s chapter on the collaboration between academic and student affairs. These authors utilize Student Development Theory (SDT) as a theoretical foundation that assists members of various sectors of the college to collaborate for student success. This chapter addresses how a theoretical foundation, facilitation of student engagement, and a model of shared responsibility among academic and student affairs professionals all contribute to assisting students.

Many community colleges are instituting mandatory orientation sessions. Jessica Hale’s chapter links theories of psychosocial development of students and environmental factors known to influence development with various elements of orientation. While Hale describes the large disparity between various community colleges’ orientation programs (number of sessions, mandatory or voluntary, online or face-to-face), the author also affirms that there is evidence to suggest “that participation in orientation increases persistence from term to term” (86). While residence life may be more commonplace on four-year campuses, Barber and Phelan note that, as of 2013, nearly 25 percent of community colleges “offer on-campus housing” (95). This number is astounding considering the diverse student populations community colleges typically serve. These authors emphasize how much informal learning takes place in communal spaces like campus housing, and suggest ways in which formal learning can be integrated into residence halls (such as “inviting faculty and staff to participate in student life activities”) (97). In order to assist community college students, professionals working with them must know who they are, collaborate with other professional groups on campus, and think creatively about how to help students succeed.

The final part of this text is “A Closer Look: Specialized Populations and Communities on Two-Year Campuses.” This section of the book exemplifies just how varied and complex the community college population truly is. A growing number of older adults are returning to school, especially to community colleges. Some of these “third age” learners are enticed by free tuition, motivated to stay busy and active, interested in an “encore career,” or desire to stay connected to a larger community (115-117). The chapter by Fagan and Dunklin on military veterans presents some unsettling statistics, especially regarding female veterans. One such statistic is that while “female veterans have to deal with the residuals of war” like their male counterparts, “23 to 30 percent of female veterans reported military sexual trauma while on active duty” (130). Dimpal Jain’s chapter challenges the limited scope of previous research involving Student Involvement Theory by expanding on what “leadership” means among nontraditional students, especially among women-of-color who take on leadership roles in the context of community colleges (145-147). The concluding chapter utilizes Bourdieu’s concepts of cultural and social capital to explore the complex ways in which particular student populations (adult immigrant ESL learners, student athletes, LGBTQ students, and veteran students) may be marginalized within the normative power structure of higher education.

This book sheds light on multiple areas in which America’s community colleges are being shaped by the multitude of missions (academic, political, social, economic) continually assigned to them. Administrators, faculty, and professional staff at any institution of higher education as well as city, county, state, and federal officials who are invested in higher education in their locale would do well to read this book to learn how to understand, support, and look closer at students in their community.