Using Games to Enhance Learning and Teaching: A Beginner's Guide

In her Teaching Theology & Religion review of Nicola Whitton’s Learning with Digital Games: A Practical Guide to Engaging Students in Higher Education, Rachel Wagner observed that the book “offers general advice for those brave enough to write their own games for educational use, but the book is not, nor does it claim to be, a handbook on how to produce video games” (Teaching Theology & Religion 15, no. 1: 91). Whitton’...

In her Teaching Theology & Religion review of Nicola Whitton’s Learning with Digital Games: A Practical Guide to Engaging Students in Higher Education, Rachel Wagner observed that the book “offers general advice for those brave enough to write their own games for educational use, but the book is not, nor does it claim to be, a handbook on how to produce video games” (Teaching Theology & Religion 15, no. 1: 91). Whitton’s newer co-edited collection with Alex Moseley, presumably, is intended to be that handbook, though many of its initial chapters seem to replicate Witton’s original call for more educators to take an interest in game pedagogy and put some investment in games for the secondary and post-secondary classroom. From there, the book offers the fundamentals, from the rudimentary to the quite advanced, but breaks it into such discrete units that a certain degree of disconnect forms between the separately useful entries.

Whereas an entire chapter, co-written by Whitton and Dave White, did not need to be dedicated to “Narrative” (such as explaining what conflict or plot is), other sections, like “Mapping Games to Curricula” by Moseley and Rosie Jones, could have been given more page space to explore their complexities. In fact, the collection does offer real-life case studies of games developed for and attempted in the classroom, but their lack of variety in terms of academic disciplines disappoints; [in]visible Belfast and ViolaQuest are marvelous examples of games-based education promoting the literary exploration of a city and the social orientation of students to the wider campus community, respectively, but, in as much as they document successes in this form, they do not suggest how to replicate it in other fields.

Perhaps the most useful portions of the collection for instructors of religion or theology come from two altogether different approaches within its covers. The chapter with the clearest ready-made step-by-step process or blueprint for game development is Simon Brookes and Moseley’s primer on constructing authentic learning activities (ALA) across what they term “the reality gap” of the game and the classroom (94, 96). Though editors Whitton and Moseley have their own chapter on design considerations, Brookes and Moseley’s discussion includes and exceeds the editors’ clear preference for Alternate Reality Games (ARGs) where a blend of real-world technologies lead students through a semi-fictional narrative toward the game’s learning objectives. While the thrill of an ARG can be contagious, chapters like Brookes and Moseley’s will still benefit the instructor-reader who is not yet ready to take such an intensive, immersive plunge.

Sarah Smith-Robbins delivers the other superlative chapter, a highly theoretical but ultimately rewarding consideration of virtual worlds’ utility for learning. True to Whitton’s early warnings to “scaffold” games so that they move from easy to harder to then still-harder tasks, Smith-Robbin’s chapter is reserved until close to the end, a quantum leap into Activity Theory and Game Ecology Models from the rudimentary material on quantified competition (such as “pointsification”) or multimedia options that form the initial foundation of the book. It seems highly unlikely, however, that the reader who began with those would “level up” to Smith Robbins’s discourse.

Using Games to Enhance Learning and Teaching is an impassioned, valuable book, entirely worthy of educators’ consideration, as are games for educational purposes overall. The collection can easily be likened to some of the most popular games available, with many playing them simply to complete them and not to uncover their every secret. Likewise, most educators will find the book more valuable for its constituent pieces rather than its entire whole. 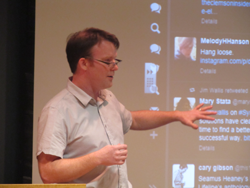 For several years now, I have experimented with using social media to improve student learning. I began with an exercise using Twitter to teach reader-oriented biblical interpretation (see my recent article in Teaching Theology & Religion). As the Gospel of Mark was read aloud in class, I asked students to ...