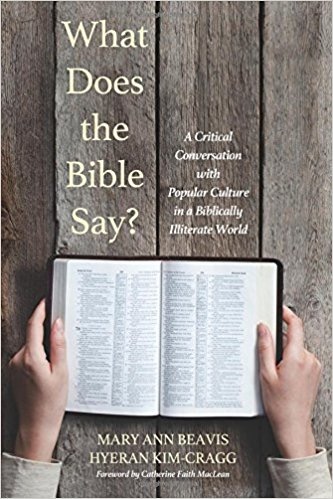 What Does the Bible Say? A Critical Conversation with Popular Culture in a Biblically Illiterate World

Mary Ann Beavis and Hyeran Kim-Cragg, a biblical scholar and a practical theologian, respectively, address a number of topics that are engaged by people outside of the contours of usual religious contexts; those who tacitly or consciously engage with scriptural and religious themes. It is this audience that the authors seem in particular to target: the everyday person whose religious viewpoints are influenced by media and popular culture, without their ...

Mary Ann Beavis and Hyeran Kim-Cragg, a biblical scholar and a practical theologian, respectively, address a number of topics that are engaged by people outside of the contours of usual religious contexts; those who tacitly or consciously engage with scriptural and religious themes. It is this audience that the authors seem in particular to target: the everyday person whose religious viewpoints are influenced by media and popular culture, without their realizing the underlying misconceptions borne of poor theologies, or uncritical appropriation of traditions with little or no basis either on sound doctrine or biblical knowledge. In juxtaposing biblical themes such as creation and apocalypse, sin and salvation, Moses and Jesus, Jews and Christians, God and Satan, Christ and Antichrist, gender and God, purity and sex, and suffering and sacrifice, in a creative dialogue with cinematic culture, the authors seek to dispel many of these aforementioned misconceptions.

Beavis and Kim-Cragg have succeeded in making scholarly information accessible, taking pains to define technical terms – whether Hebrew, Greek, or theological jargon – that would otherwise be foreign to nonexperts. They provide solid exegetical and theological analysis of the themes they have chosen. Readers and teachers will find the creative way in which they use movies from a wide array of genres to further their discussion helpful. “Before viewing” and “after viewing” questions allow one to link their cinematic selections with the theological theme under discussion. This is especially helpful since, for the most part, the authors did not choose religious movies; it is, after all, an engagement with popular culture, not religious media.

As a professor of constructive theology, I especially appreciate the discussion of salvation in chapter 2, subtly broadening its meaning by disconnecting it from the notion of sin and at least implicitly relating it to the Reign of God, and their discussion of eschatology in chapter 5, rightly linking it with relationship. Another discussion which I found to be of importance in this time of intolerance and rising tides of anti-Semitic, anti-Muslim, and nativistic impulses, was their discussion on Jews and Christians (chapter 4). While their assertation that “Jesus was a Jew” might seem simplistic, I can attest to the fact that such a statement can be a surprise to some beginning seminary students. Beavis and Kim-Cragg honestly tackle texts in Second Testament that have been interpreted as “anti-Jewish” as well as the history of anti-Semitic interpretations in Christian theology. It is their conclusion that in spite of this persistent prejudice, we stand well to remember that “God blesses all” (62).

For teachers in the areas of practical theology, this book can be used in courses that integrate biblical studies with Christian education, theology, or preaching. The authors’ approach to theological themes can prove helpful to beginning seminary students who come with popular misconceptions, only to become disconcerted by learning in the classroom what they believe to be contradictions of faith. The book’s methodology of integrating theological content with media is insightful and consonant with the contemporary world in which our students live and practice ministry. It is particularly useful as teachers become aware of the various learning styles of students and expands their arsenal of creative pedagogical practices. I would hope that this book invites teachers to consider the use of movies, music, photography, and online content such as TED talks in their classroom. This book is a good companion to such sources as Timothy B. Cargal’s, Hearing a Film, Seeing a Sermon, although the latter tends to focus more on homiletical and liturgical integration.

I do have some questions. While I assume that the audience for this book is either a lay or church community, the authors themselves never clearly identify their audience: is this meant for a more evangelical or progressive church community, or was it directed primarily to an unchurched community? I would have found it helpful for the authors to have been more explicit about their audience. This leads to a second question: why their particular juxtaposition of selected themes? Was it influenced by context and audience? For example, why discuss God and gender, and not God and justice? Would the latter not have allowed the discussion to be broader than simply whether our God-talk is inclusive in terms of male or female images? At a time of imposition of heteronormativity, homophobia, and rising tide of violence against people of color, it could have led to larger questions about white privilege, and broader assumptions about gender could have been broached. Along those lines, could the discussion have been further enriched with the inclusion of more voices of color, both in the authors’ scholarly sources and in their movie choices? Could some of these very themes have been underscored with such movies as Hidden Stories, The Color Purple, Selma, Even the Rain, The Joy Luck Club, or others that showcase actors of color or LGBTQI persons?

These questions, of course, do not detract from the overall importance and value of the book. This book, with its solid theological and biblical analyses, is an important resource particularly for those of us who continuously encounter groups or individuals in our churches, classrooms, and communities that espouse uninformed biblical and theological beliefs influenced by popular culture.

A conversation about the benefits, possibilities, and challenges of teaching online with Dr. Roger Nam of George Fox University, Dr. Eric Barreto of Luther Seminary, and Dr. Kate Blanchard of Alma College.

Teaching the Bible in the Liberal Arts Classroom, Volume Two

Reading The Lost Jewels of Nabooti, a “Choose Your Own Adventure” book by R.A. Montgomery as an eight year old in 1979, I never could have imagined relating that adventure to the book of Revelation in scripture. Now, after reading Robby Waddell’s essay “Choose Your Own Adventure: Teaching, Participatory Hermeneutics, and the Book of Revelation” in Teaching the Bible in the Liberal Arts Classroom: Volume 2, the possibility of a ...

Reading The Lost Jewels of Nabooti, a “Choose Your Own Adventure” book by R.A. Montgomery as an eight year old in 1979, I never could have imagined relating that adventure to the book of Revelation in scripture. Now, after reading Robby Waddell’s essay “Choose Your Own Adventure: Teaching, Participatory Hermeneutics, and the Book of Revelation” in Teaching the Bible in the Liberal Arts Classroom: Volume 2, the possibility of a scholarly conversation between the two makes me eager to teach Revelation again.

Teaching the Bible includes four parts: tactics, strategies, principles, and reflections on Biblical Studies in the liberal arts classroom. Waddell’s essay is just one of several essays sharing tactics for teaching the Bible. Each of these tactical essays highlight creative and compelling possibilities for teaching: Twitter as a tool for conversation and connecting, Wikipedia as an example of Pentateuchal formation, and digital storytelling to illumine Biblical character studies are just a few examples. Certainly it would be easy to view these tactics as mere activities for class discussion. However conceptualized, within this framework these tactics reveal deeper truths: the changing role of teachers in a twenty-first century globalized classroom, the ongoing fight for humanities’ role as a vital component of a post-modern education, and facilitating effective learning when it is all too easy for a student to surf the Internet while taking notes on their computer.

Editors Jane S. Webster and Glenn S. Holland, along with their cohorts in the “Teaching Biblical Studies in the Undergraduate Liberal Arts Context” within the Society for Biblical Literature, care about this deeper conversation. Tactics for teaching become activities when separated from guiding strategies and overarching principles. Tactics become a particular art form when guided by essays like those included in Parts II and III of this book.

Consider the strategy suggested by Sonya Shetty Cronin in her essay, “Fantasy: The ‘Renewed’ Genre Making Necessary a Biblical Education for Understanding Our Contemporary World.” Cronin’s argument suggests scholars of Biblical studies should be just as versed in modern fantasy novels as they are in Philo. Doing so allows scholars to continue to present the modern relevance of Biblical themes as well as their undergirding of so much of popular culture. If strategies are the goals that guide tactics, principles are the greater themes that illumine those strategies. In this volume, themes of ecology, supersessionism, and violence are explored as principles that call for a deeper conversation within the Biblical narrative and contemporary culture.

The final three essays, exploring Biblical studies in the liberal arts curriculum, are valuable conversation partners. For example, Steven Dunn highlights a syllabus and course objectives drawn into conversation with the ability-based curriculum at Alverno College. Katy E. Valentine probes the problems and possibilities for teaching students from non-religious backgrounds.

Certainly The Lost Jewels of Nabooti drew me into the scholarly conversation unfolding within these pages. To be clear, this excellent book is not unlike a “Choose Your Own Adventure” book where the reader chooses the adventure most needed within their classroom setting.