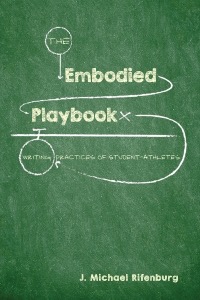 Michael Rifenburg begins and ends his book with the melancholy story of a student who didn’t make it. A freshman at Auburn University, “Trey” was a star on the football field, but a dud in his classes. Rifenburg – then a master’s student working as a tutor for athletes – tries to help him, but it doesn’t work. When the Auburn football team wins a national championship a few ...

Michael Rifenburg begins and ends his book with the melancholy story of a student who didn’t make it. A freshman at Auburn University, “Trey” was a star on the football field, but a dud in his classes. Rifenburg – then a master’s student working as a tutor for athletes – tries to help him, but it doesn’t work. When the Auburn football team wins a national championship a few years later, Trey has already dropped out and disappeared.

Rifenburg’s book helps us understand what went wrong with Trey’s education. His ultimate argument – that writing teachers can better support student-athletes by understanding the embodied knowledge they bring from the playing field to the writing classroom – asks teachers to see the hidden talents in even those students labeled remedial. Rifenburg pushes past both the “dumb jock” stereotype and the tension that exists between academics and athletics in many colleges. He breaks down these misconceptions and boundaries to explain student-athletes as possessors of “a prior knowledge honed through bodily engagement with text and through writing practices that privilege the body as a central mode of meaning making” – a knowledge that has long gone unrecognized and untapped in the writing classroom, where the abstract practice of writing can seem disconnected from physical experience (5).

As a graduate of Division I sports powerhouses like Auburn and the University of Oklahoma – where he worked in a writing center dedicated to serving student-athletes – Rifenburg is well-poised to make this argument. He was embedded for a season with the University of North Georgia’s men’s basketball team, where he attended practices and interviewed players and coaches about how they make meaning on the field. He performs detailed readings of baffling football plays from Auburn’s thick playbooks. His conclusion is that student-athletes learn complex theoretical plays through physical engagement, with the implication that this kind of learning is multi-modal, exacting, and collaborative – and potentially transferable to the traditional writing classroom. He concludes that student-athletes learn their sport through three “cognitive processes”: spatial orientation (or understanding their bodies in relationship to other bodies on the field), haptic communication (or physical touch, as when a coach re-positions a player’s hips), and scaffolded situations (or the step-by-step process through which players build up to learning a complex play). For Rifenburg, these skills are not that different from what writers do: position their ideas in relationship to other peoples’ (or spatial orientation), understand writing as a communal activity that takes place within and between groups of people (or haptic communication), and build upon many early drafts to create longer, complex texts (or scaffolded situations). He ends by prompting the reader to ask how these cross-currents between writing and playing can be leveraged to support student-athlete writers in the classroom.

In the end, Rifenburg raises more questions than he answers. His description of the analogy between writing and playing sports is original and clear-sighted, but it remains only an analogy, as he stops short of offering strategies for putting this insight into action – an odd lacuna for a book that places so much emphasis on concrete, embodied experience. Indeed, I often found myself mindful of what is left out of Rifenburg’s book. While he displays deep familiarity with the field of writing studies, he does not acknowledge gender studies or disability studies, fields that are historically groundbreaking in exploring embodied meaning. Similarly, Rifenburg’s focus is exclusively on men playing high-profile, competitive, aggressive sports; do other types of athletes experience bodily knowledge differently? What of swimmers, runners, or dancers? Women athletes? Do student-athletes at small liberal arts colleges or community colleges – where athletics are not as prominent – experience a different kind of relationship between sports and academics? Rifenburg’s study opens the door for many important inquiries to follow. Ultimately, he provides a model for thinking about matter, mind, and underexplored student expertise.